Fancying someone of the same sex is normal, whether this is how you feel all of the time or just sometimes.

It's also normal to be sexually attracted to members of both sexes or not to be interested in sex at all.

It's also normal for our feelings about sex to change over time.

What does 'straight' mean?

Also called being 'heterosexual', straight people are attracted only to members of the opposite sex.

What does 'lesbian' mean?

A lesbian is a woman who is attracted to other women.

What does 'gay' mean?

What does 'bisexual' mean?

Bisexual people are attracted to both men and women.

This means different things for different people.
Broadly speaking, the term transgender is used to refer to people who feel that their gender identity is in some way different.
Transgender people can be attracted to men or women or neither.

What if I think I'm gay, lesbian, bisexual or transgender?

First, know that you're not alone and that feeling this way is okay.
Everyone has their own sexuality (feelings and desires about sexual and emotional attraction) and gender identity. It can take a long time to figure out how we really feel about these things.
If you are under 25, you can contact LGBT Youth Scotland.
In Argyll and Bute, Waverley Care also support people, young or old, who are LGBT or questioning their sexuality or gender identity - visit the Waverley Care website.
Waverley Care’s service is confidential and discreet if you need it to be, so if you identify as heterosexual (straight) they can still provide you with support.
Waverley Care also provides outreach and HIV testing to men who have sex with other men, no matter what their sexual orientation is.
You can call, text or email the project worker at Waverley Care: 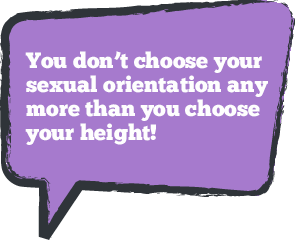